Mercury Motors started in 1941 as the "Mercury Engineering Company".   As well as serving petrol, Mercury Engineering operated a machine shop, working on Government contracts and essential works orders at the start of World War II. They also specialised in fitting gas bag frames to the top of cars and lorries to enable them to run on gas.

Part of the workshop was let to Osterbury & Lale for their grinding machine and another part to Brown & Doe for their capstan lathe. They worked mainly on Admiralty contracts. 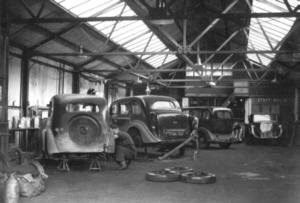 When the owner of Mercury Engineering emigrated to New Zealand in 1948, Margaret (Meg) Rees took over the lease.

In the 1950s a car showroom and office were added to the site and Mercury became a main dealer for Ford, selling both new and used cars and spare parts, carrying out servicing and repairs as well as selling petrol.

In the early 1960s Meg and her husband Brian bought the freehold of the site and were later joined in running the business by their two sons, Anthony and Robin. In 1972 Mercury stopped car sales and the showroom space was used for the expanding spare parts department. The sale of petrol stopped in 1982 and by 1984 Mercury had expanded further with the construction of a new building to the rear of the site. 1985 saw the company change its name from Mercury Engineering to Mercury Motors Limited. Although no longer a main dealer for Ford, Mercury Motors continued to specialise in servicing, repairs and spare parts for Ford vehicles. In 1986 the workshop was expanded and a new office built. As the demand for parts for the ever increasing number of Ford models grew, the Parts department was again expanded with the addition of a mezzanine floor.

The 1990s, up to the present date, has seen several changes. Computerisation in the Parts department for stock control, in the office for payroll and accounting and in the workshop for diagnostic testing have all brought significant benefits to the business. As an MoT Testing Station and specialists in Ford vehicles, Mercury Motors continues to provide first-class servicing, repairs and parts for its customers.